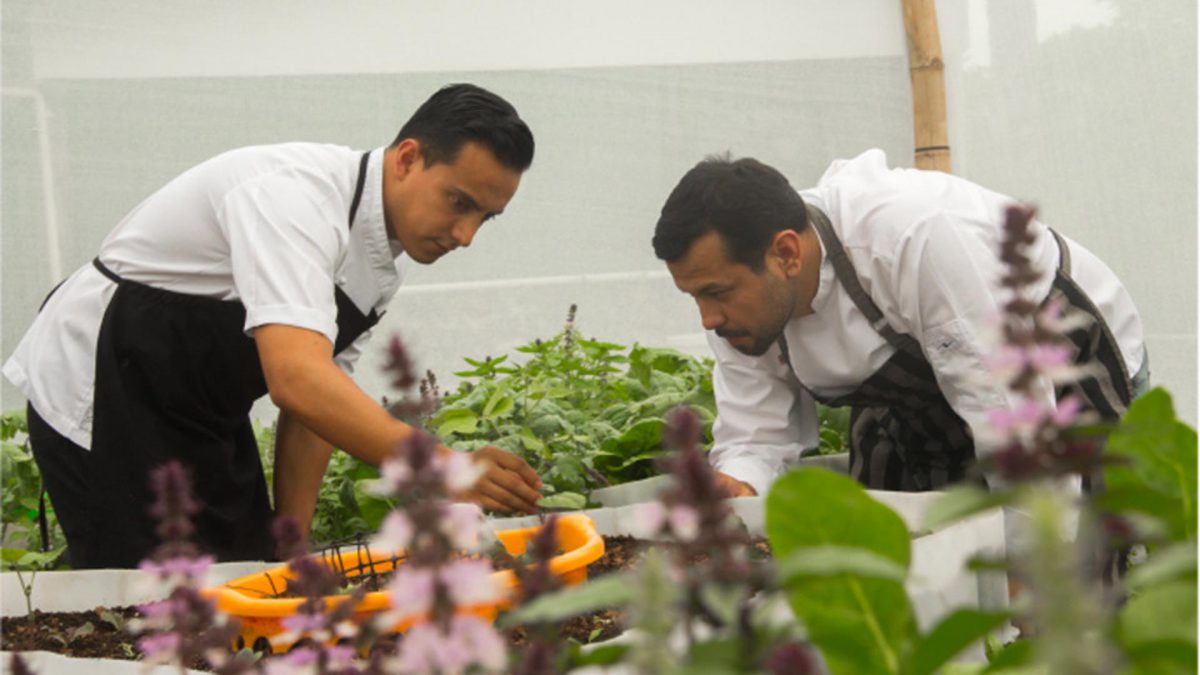 In 2014, Pedro Andrés Veintimilla and José Merlo founded an innovative agricultural project, now known as the Chakrita Lab. The start-up takes its name from concept of the Andean chakra, a plot of land used to produce the food necessary to sustain a community. Chakrita Lab is a modern experiment in bringing agriculture to spaces and communities that otherwise wouldn’t have local food production. The Chakrita methodology adapts traditional cultivation practices to contemporary spaces and environmental realities.

Chakrita Lab uses recycled barrels to contain the production of lettuces and other leafy vegetables. As you can see in the diagram below, the Chakrita barrel takes advantage of vertical space by planting vegetables in small outcropping pockets of soil in openings along the side of the barrel. The center of the barrel is filled with compost-ready earthworms that allow the Chakrita to fertilize itself, making the food production as efficient as possible.

Merlo and Veintimilla began to experiment with this methodology in initial pilot projects in Quito, setting up barrels on urban terraces and in community gardens. The product was a great success, and those lucky enough to have access to a Chakrita in the Andean capital city were able to produce their own fresh vegetables even if they didn’t have enough space to plant an actual garden. However, the young entrepreneurs quickly began to see the productive potential of this unique product for another place in Ecuador, one which faces a special set of agricultural challenges: the Galapagos Islands.

The archipelago’s harsh and arid climates make agriculture and other plant life on the Galapagos challenging. Some small, private farms operate in the highlands regions of Santa Cruz and San Cristobal, but their production is not nearly enough to sustain the island’s population. The majority of food items consumed in the Galapagos have to be imported from mainland Ecuador. The archipelago lies more than 600 miles off the coast of Ecuador, which means that the little produce that does reach consumers is often poor in quality and variety, not to mention prohibitively expensive. Most of the population of Galapagos can’t afford high-quality fresh produce. And the produce they can get comes with a high environmental footprint.

Seeing the potential impact of the Chakrita Lab to support the food sovereignty of Galapagos, Merlo and Veintimilla began to look into how they could take their project to the islands. They applied to the 2014 Greenovators Prize, co-sponsored by Earth University and the Inter-American Development Bank, which offered seed money to fund young entrepreneurs who proposed projects with a high environmental impact.

Out of the 750 entrepreneurial projects that applied, Chakrita Lab was selected in the category of Resilient Agriculture for the highest monetary prize available. With this initial investment, the young entrepreneurs were able to test out their project in the Galapagos. When they first started setting up shop in Galapagos in December 2014, they pursued partnerships with local governmental organizations in Puerto Baquerizo Moreno. However, although everyone was quickly able to see the potential impact of the Chakrita Lab initiative, none of these initial contacts proved to the fruitful.

And that’s where Chakrita Lab becomes part of the story of Finch Bay. Veintimilla and Merlo decided to look for a partner in the private sector, a partner with a demonstrated commitment to sustainability in the Galapagos, a partner who would have a real commercial interest in the success of the Chakrita Lab garden and whose product would benefit from the hyperlocal production of herbs and vegetables. After presenting their project to Roque Sevilla, Veintimilla and Merlo got to work on putting up the installations of Chakrita Lab’s first pilot garden.

The grounds of the Finch Bay Galapagos Hotel now includes a 100 square meter garden, covered in a plastic greenhouse tarp. Remarkably, the Chakrita barrels were able to grow at sea level the same herbs and leafy vegetables that they produced at Quito’s altitude of 4000 meters above sea level. This is thanks, in large part, to the Chakrita technology, which is able to make efficient use of both water and nutrients because of its central core distribution capacity.

The Chakrita Garden at the Finch Bay Galapagos Hotel is now an important resource for the hotel’s restaurant, providing fresh produce for salads and other dishes. The garden’s offerings include: a variety of lettuce, kale, chard, herbs, and edible flowers.

The Chakrita Lab, as a Finch Bay supported pilot project, is now looking to expand into other endevours in Galapagos. They are currently working with local organizations and citizens in Santa Cruz to develop larger sustainable farms that can make an even bigger contribution to food security in the archipelago.

Come check out the Chakrita for yourself!

previousFinch Bay selected as finalist for the world legacy awards