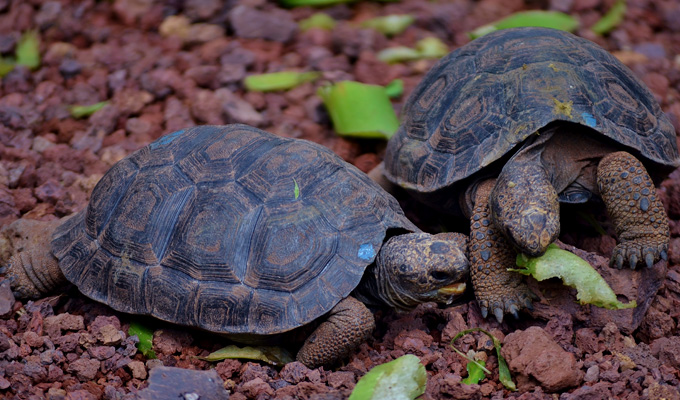 The Guardian of the Galapagos – Charles Darwin Foundation

The Galapagos Islands would not have nearly so much to brag about if it were not for the Charles Darwin Foundation. The CDF has led conservation efforts since its founding in 1959 with the aim of providing scientific knowledge and support for the Galapagos Islands in an effort to protect the miraculous biodiversity that it sustains today.

The Charles Darwin Foundation and the projects it has implemented over the last five decades is thanks to the work of hundreds of dedicated educators, volunteers, scientists and support staff from every corner of the world. By far the most well known, and also successful of these is the Giant Tortoise Repatriation Program. By the time the project began in 1975, giant tortoise populations in the archipelago were in hugely distressing conditions. Pinzon and Española island populations were hit hard by centuries of senseless destruction and introduced animals. Neither island had successfully been able to reproduce for centuries, and there were a mere 200 and 14 adults, respectively. The CDF gathered as many tortoises and eggs as it could and initiated a breeding and rearing program. With over 550 tortoises repatriated to Pinzon and more than 1,700 to Española, the program has been declared a success, continuing to this day. The world-renowned Lonesome George was also protected by the CDF with support from the Galapagos National Park Directorate (GNPD). Lonesome George was the last member of the Pinta Island giant tortoise population and lived at the foundation’s facilities for over 40 years where he died in 2012, thus ending the line of his population

Nevertheless, the giant tortoise program was just one of many that the foundation has successfully carried out. The land iguana breeding and repatriation program implemented in 1976 has been hugely significant for the struggling land iguana populations, and Project Isabela, which was launched in 1997, has successfully restored populations on the northern section of Isabela Island, as well as Santiago and Pinta islands, while completely eradicating all feral goats from these locations. The advances made thanks to the CDF are becoming more effective each year, with technological advances and an ever-increasing knowledge base.

Charles Darwin Foundation and the community

Nevertheless, the work it has accomplished could not have been possible without vital support from the local and national government. The foundation has worked closely with the Ecuadorian people since its creation. The Charles Darwin Foundation together with the local Galapagos government launched its first educational conservation program in 1966 and also initiated the Galapagos Inspection and Quarantine Program with the Galapagos National Park Directorate in 2000, through which locals work to control the introduction of new organisms to the archipelago through boat inspections as well as fumigation and sanitation requirements. Furthermore, the CDF worked with both the local and international community to clean up the 150,000 gallons of diesel fuel that spilled during the tragic oil spill in 2000, a mere half-mile from shore.

More recently, the Charles Darwin Foundation worked with the Ecuadorian government to add an additional 18,000 ml2 to the marine reserve, significantly increasing the size of protected waters in the Galapagos, as well as the breeding grounds of the largest concentration of sharks in the world. This project was also supported by several other organizations, including the National Geographic Foundation.

As a result of these projects, 95% of the natural state of the Galapagos Archipelago has been preserved. This work has been celebrated by the scientific and international community in general, for which the foundation has received numerous awards, including the Sultan Qaboos Prize in 1999 from UNESCO, the Cosmos International Award from Japan in 2002 and the Distinguished Achievement award from the Society for Conservation Biology. It was also awarded the BBVA Foundation Prize from Spain in 2004.

The Charles Darwin Foundation widely encourages all visitors to the islands, as well as its residents, to join the foundation in its efforts. Visitors are welcome to visit the Charles Darwin Research Station to learn more about present conservation efforts.

previousExploring the Underwater World of the Galapagos, learn about the best diving locations

nextGalapagos Finches – The Key to Evolution