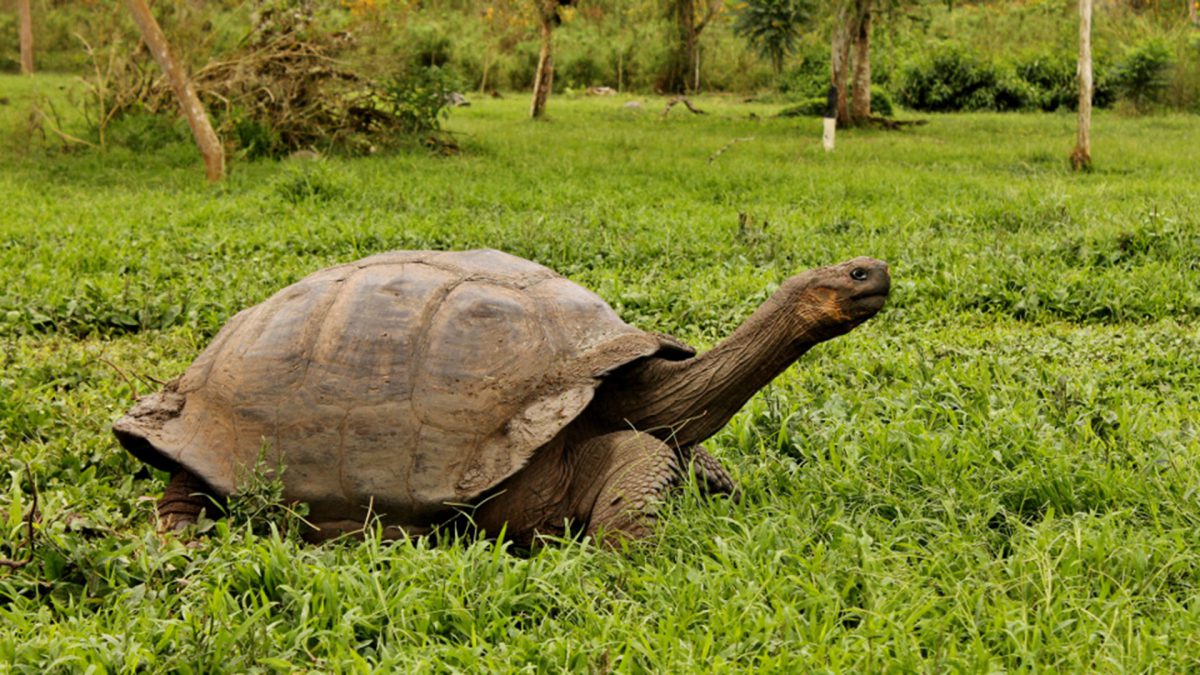 Migration of Galapagos giant tortoises: moving on up, to the upper side!

Classic migration patterns do exist for the Galapagos giant tortoise, except that they’re obviously on a much smaller scale. It’s more like a smaller, slower version of what birds do, except on land. And it’s specifically during this time of year that giant tortoises gradually begin to make their way up into the highlands of Santa Cruz Island. Studies have shown that adult males over the age of 20 (and even some females) trek slowly and untiringly across and up volcanic terrain, a trip that averages about 3.7 miles (6.7 kilometers) over the course of two or three weeks.

Rainy Season = A Wide Open Buffet in the Lowlands

The humid highlands on Santa Cruz Island is where the tortoises stock up on grass and plants before heading down to the lowlands around November and December when the rainy season starts. The reason for this has to do with their being more highly nutritious plants down in the lowlands during the rainy season. But during the dry season (around these months), vegetation tends to dry out in the lower areas and, consequently, they head back up to where vegetation sticks around throughout the year thanks to the presence of clouds.

– The feast begins during the rainy season! – It’s interesting to note that only the adult and larger tortoises are more prone to being on the move. As the rainy season comes to an end, these adults start their slow ascent into the highlands. Adult females linger a little longer in the lowlands in order to lay their eggs before making their way up to the highlands. Oddly enough, the smaller, younger tortoises tend to stick around in the lower, elevated regions throughout the entire year instead of migrating.
Their trajectory is often very linear and tends to follow specific paths up and down the slopes of the island. These routes can be up to 10 kilometers long in length and can span from sea level to the highlands.

The Tortoise and the Caribou

A number of other terrestrial animals tend to migrate as well. One of the most famous animals to move across land so dramatically is probably caribou, which holds the record for longest migration (on land) at 1,100 kilometers (700 miles). On the other hand, tortoises on the Galapagos migrate at a rate of around 200 to 300 meters (650 to 1,000 feet) per day.

A Tale of Two Generations

It’s still unclear as to why the animals don’t opt to rest during the dry season or why the young don’t follow in the same trudging footsteps as their elders. Nevertheless, scientists do speculate that it might have to with the fact that energy expenditure is too strenuous for the younger groups, or that there may still be enough food available for the smaller tortoises. It also might have to do with the fact that younger tortoises are less capable of tolerating the colder temperatures that are found up in the highlands of Santa Cruz Island.

The Finch Bay Galapagos Hotel offers tours up into the same highlands of Santa Cruz, giving you the chance to witness these Galapagos giant tortoises out in the wild! So book you stay and tour with us today, and experience the Galapagos (and its iconic giant tortoises) with the perfect level of luxury!