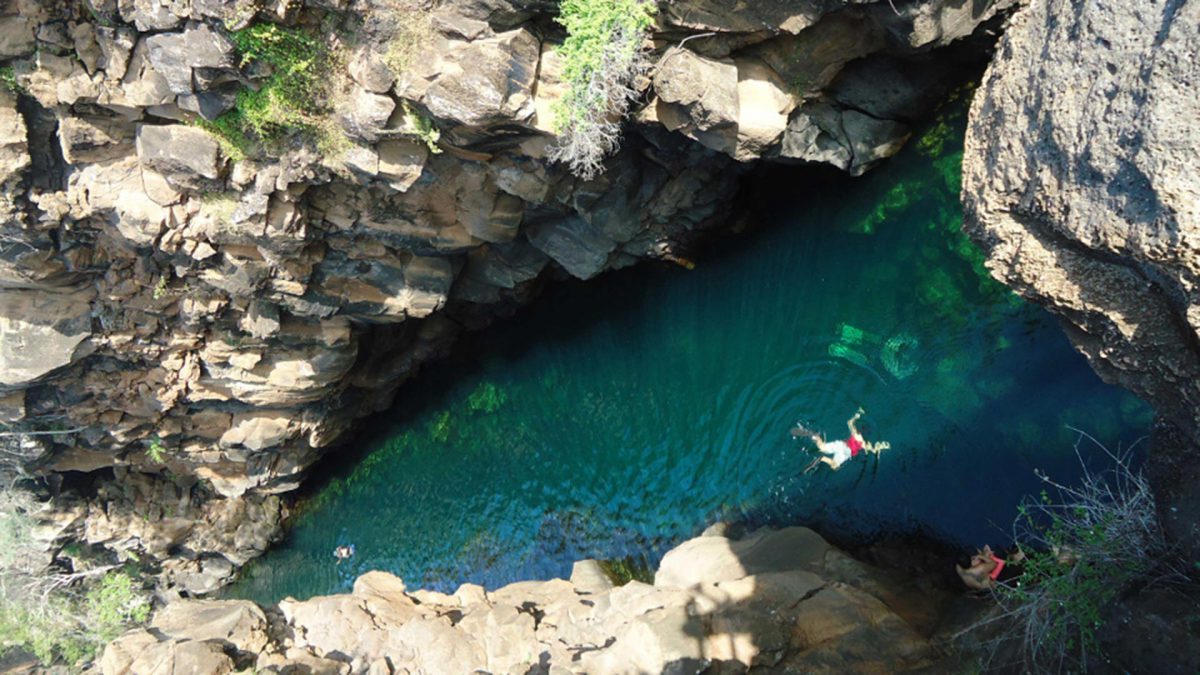 Las Grietas means “the crevasses,” a pretty simple name for one of the Galápagos Islands‘ most enchanting locations – a series of three elongated, almost rectangular pools that cut through towering lava cliffs. To call it a simple “swimming hole” would do it a bit of injustice, considering its fantastic natural beauty. Taking a plunge in its waters that consist of a deep, emerald hue is indeed the best way to live the experience.

– Trail to Las Grietas – worth the stroll alone – 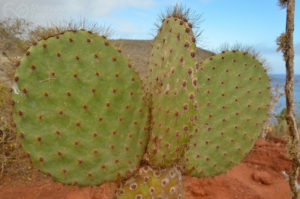 Getting there requires a brief hike from the Finch Bay Galapagos Hotel (approx. 15-20 minutes) past a small national park entrance, but it would be a shame to rush through. The trail meanders through an exotic, alien landscape that includes a forest of giant Opuntia cacti and a walk across a pink, salty lagoon. Migratory and sea birds can frequently be seen there as well.

The cacti almost look like tiny natural satellite dishes, having evolved this way in order to loom over its shrubs, capture light from the sun and keep much of itself out of the reach of the islands’ herbivores — the giant tortoises and land iguanas.

The walk is rather easy but solid footwear is best, given that parts of the trail cut across some sharp and rugged areas of volcanic rock. A relatively new wooden staircase and platform make the water at the bottom of Las Grietas much easier to reach than before. An added bonus to this bit of construction is that it also makes it more convenient to dive into La Grieta’s waters, for those interested.

It’s interesting to note that Las Grietas is fed underground by a river from one end and saltwater from another end (making its way into the small canyon through the cracks that connect Las Grietas to the sea).

To swim the entire length of the crevasses requires some clambering over rocks at the end of each pool. Flippers and snorkel can enhance the experience, but aren’t necessary to enjoy it. Some people jump into the water from high up near the rim, but we don’t recommend this as it can be very dangerous.

– Right in two: Las Grietas offers visitors a giant sliver of emerald waters to relax in. Photo by: Thomas Stromberg –

So long as there aren’t too many people jumping down, the water tends to be very calm. Not only on the surface, but underneath as well – the mixture of salt and fresh water keeps out a lot of the larger marine animals. So anyone that visits can relax and float around calmly, without ever having to worry about bumping into a seal or a shark.

After that, if you’re feeling restless, there’s another trail that leads through a cactus forest along the top of Las Grietas, offering scenic views into the canyon itself, the lagoons, mangroves and coast, as well as Puerto Ayora and the highlands of Santa Cruz. It’s best to get there early to avoid crowds – and the Finch Bay is the best place to stay to do just that.

To help protect the environment, we ask that you please take a bag to collect any trash left behind by irresponsible visitors.

nextWhat are the best places to eat in Puerto Ayora?