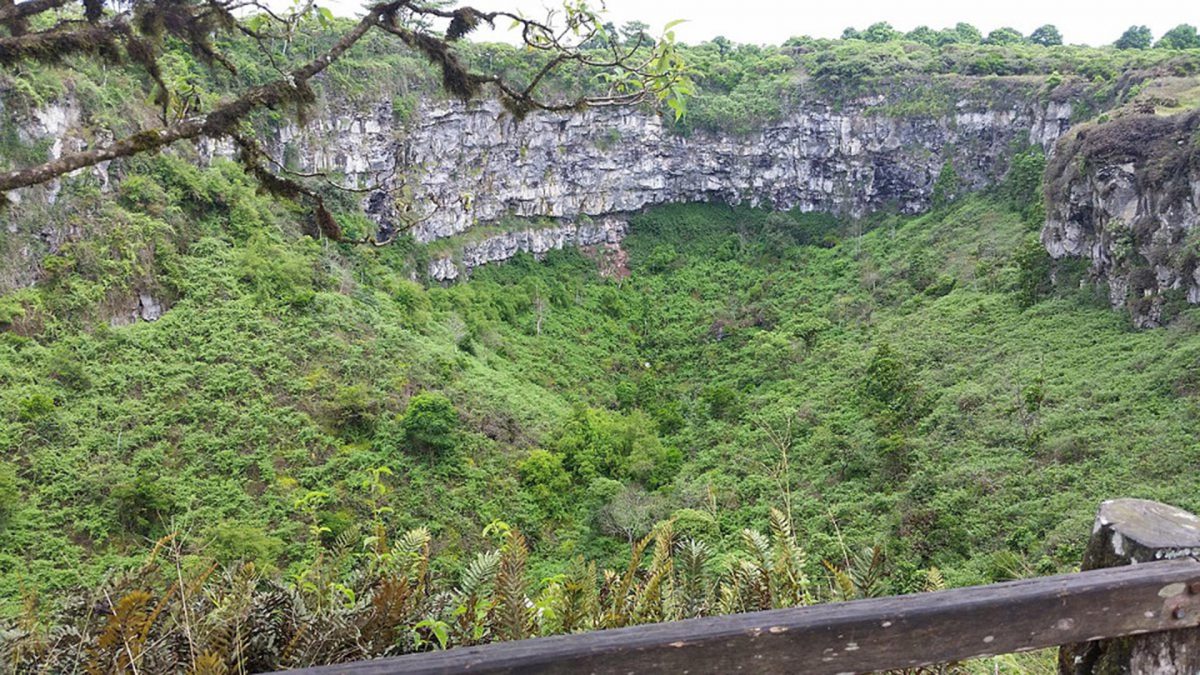 The amazing island of Santa Cruz is home to many surprising beauties that are worth the visit and that will give you a more comprehensive view of the archipelago. Its natural and social history make it the unique place that it is and you will undoubtedly want to come back over and over again. Set up camp in the luxurious Finch Bay Galapagos Hotel and make it the base from which you will embark on the most amazing Galapagos exploration. Due to the fact that only 3.34% of the entire archipelago is inhabited, getting the chance to simultaneously enjoy both the natural and social sides of the inhabited islands is rather rare. So, say if you are interested in understanding a little more about the geological history behind the island, Santa Cruz offers some amazing volcanic formations that will leave you speechless. Los Gemelos are part of these volcanic formations.

How Are They Formed?

Often mistaken for volcanic craters, Los Gemelos – or “The Twins” in English – are actually sinkholes. When the volcanoes on the islands were still active, lava flows would roll down the hills to get to the sea. Lava, being a liquid, behaves like one as well. This means it gets into any crevasse or space through which it can flow. Liquids move at different speeds, but when it gets closer to the edge, it slows down while the middle flows faster. The outer lava cools faster than the middle and starts to dry, allowing for the formation of lava walls that enclose the hotter lava within. These walls eventually become lava tunnels and magma chambers, which can be widely found throughout the highland of Santa Cruz. These geological formations remain underground for thousands of years until their roofs collapse due to erosion, which is the case with Los Gemelos.

Where Are They Located?

They are located up in the highlands of Santa Cruz, in the middle of a beautiful Scalesia forest. A few facts about these plant species will certainly interest you. Even though it doesn’t look like it, the Scalesia is actually a giant member of the daisy family, making it the biggest daisy in the world! Charles Darwin was the first one to collect specimens of this rare plant that only grows in the highlands of the archipelago where it’s more humid and the soils are more fertile. They can grow anywhere from 5 to 15 metres (16 – 50 ft) in height and are considered an endangered plant species. They are subject to the devastation wreaked by goats and other farm animals that eat their seedlings. Dramatic changes in weather – like the El Niño phenomenon – and invasive plants that take up nutrients and space from the Scalesia are also other sources of trouble. When visiting Los Gemelos, remember that they are hidden in the forest so you won’t be able to see them from the highway.

How to Get to Los Gemelos

If you are interested in visiting this amazing site, the staff at Finch Bay will be happy to arrange an outing for you. Your guide will meet you at the hotel’s lobby and a car will be waiting for you at the dock to drive you up to the highlands. After a short 20-minute ride, you will get to a parking space where your car will drop you off. From there a couple of minutes will be enough to get to the rim of the geological depressions – commonly referred to as craters by the local population. Los Gemelos are located at each side of the highway, so you will cross the street to get from one “crater” to the other. As a bonus, you will also visit a third and less visited (but just as impressive!) “crater” located on Cerro Mesa, just minutes away from Los Gemelos and situated inside of a private forest. Have your camera ready! The vistas are truly out of this world! In fact, they’re vistas that you might as well find on the moon.