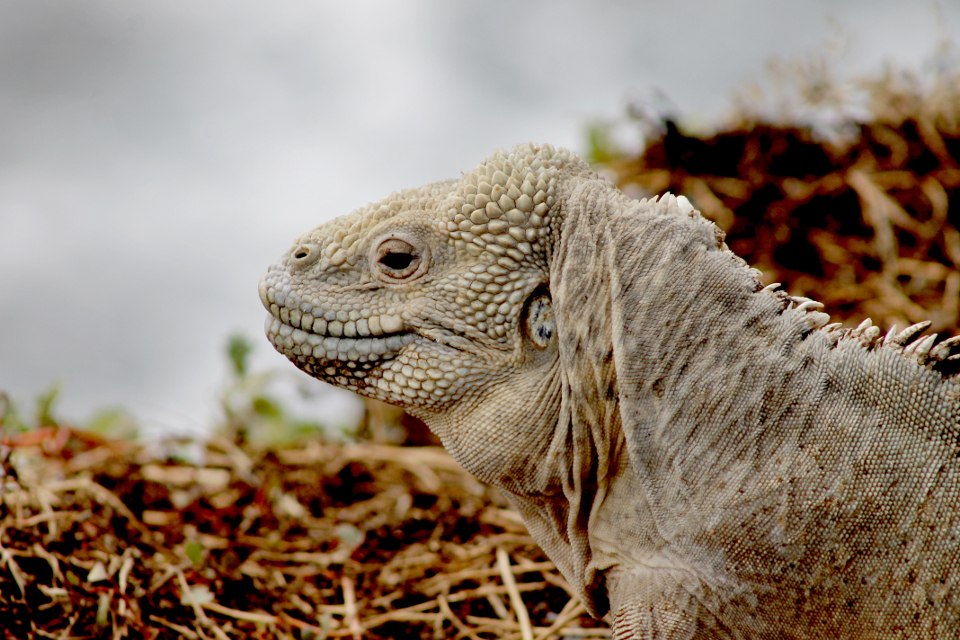 The Santa Fe land iguana in Galapagos is a member of our prestigious BIG15 group of iconic species in Galapagos. It is endemic to the island of Santa Fe which is viewable on our Sea Lion Yacht, making it a superb reason to hop aboard it at the Finch Bay Galapagos Hotel and head on over to check out this majestic creature in all its glory and mysterious colors. The island itself is located a mere 24 km2 (0.3 mi2) off the eastern coast of Santa Cruz Island!

This species of land iguana (Conolophus pallidus) differed and branched away from its more widespread cousin in the archipelago – the Galapagos land iguana (Conolphus subcristatus) – around 8-10 million years ago.
The generic name, Conolophus is actually green for “spiny crest,” which references the spiny ridge that lines their backs. Compared to the common Galapagos land iguanas, the Santa Fe land iguana has smaller dorsal spines. They also have a slightly darker shade of browner throughout their scales and also possess a tapered snout. This more obscure coloring allows the Santa Fe land iguana to blend in even more perfectly with its surroundings, making it a harder target to snare for predators. Oddly enough, Charles Darwin referred to them as being “ugly animals, of a yellowish orange beneath, and of a brownish-red colour above: from their low facial angle they have a singularly stupid appearance.”

Santa Fe land iguanas are mainly herbivores, which means they’re often seen eating on the ubiquitous prickly pear that grows on the opuntia cactus that’s found throughout Santa Fe Island.
They do this to both absorb the nutritious components of the cactus as well as to hydrate their bodies with fresh water. What’s a rather unusual creature that’s feeding on the Santa Fe land iguana? Darwin’s finches! Except all they do is simply peck off the parasites that often live atop the bodies of the Santa Fe land iguana.

The arrival of feral goats, thanks in large part to the presence of pirates and whalers in Galapagos, was a huge reason for their decimated numbers on Santa Fe Island. Fortunately, the Galapagos National Park stepped in, back in 1971, to keep the species alive by eradicating all the goats thereon. Nevertheless, the Santa Fe land iguana remains a vulnerable species because of its limited distribution on this single island. Their population is estimated to hover around the 7,000 mark.

Their breeding season sees 3-11 eggs laid by the female and isn’t all that different from the hatching season for Galapagos marine iguanas. It takes around 50 days for this clutch of eggs to hatch inside their respctive burrows.

– The average lifespan of iguanas in Galapagos tends to be 50 to 60 years. –

So be sure to make the Santa Fe land iguana a part of your experience if you’re looking to check off as many species from your BIG15 list as possible! The Finch Bay Galapagos Hotel makes for the perfect home base to explore the surrounding visitor sites and iconic wildlife!