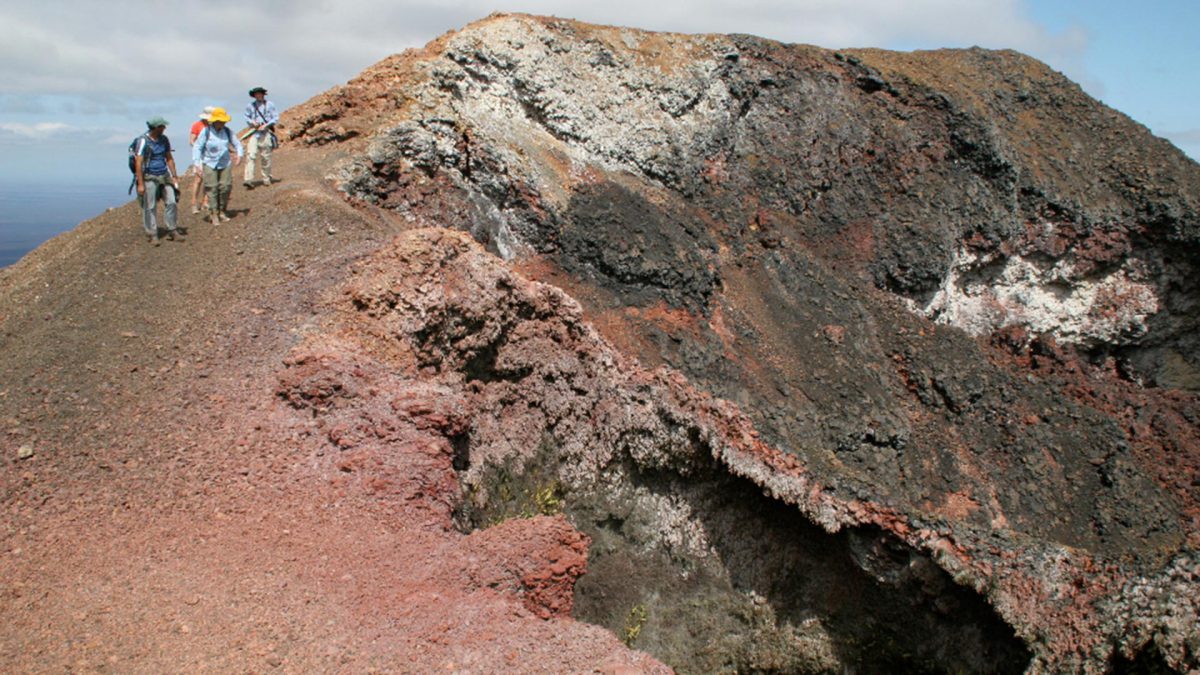 Sierra Negra is Isabela Island’s biggest and most active volcano. It is also the second largest volcanic caldera in the world while being the largest volcanic caldera in the tropics. In the eastern region of the Galapagos, Isabela Island is the only place that allows guests to see an island resulting from the explosion of various volcanoes which gradually saw their lava flows connect to form one of the biggest islands in the Galapagos. That is why Isabela has 6 volcanoes. If you want to be among one of the few that have witnessed such a unique place, then make sure you visit Sierra Negra.

While on your Finch Bay Galapagos Hotel Island-2-Island programme, this will be one of your stops. Let us tell you a little more about this interesting spot.

Many visitors coming to the Galapagos expect to see volcanoes. It’s true that the archipelago consists of volcanic formations, the volcanoes of which have a different behaviour and shape compared to those found on the continent. Because they’re widely photographed, conically shaped and massive volcanoes are what’s on people’s minds when they first think of a volcano. In Galapagos however, not all the islands have volcanoes and this is due to the fact that many of the volcanoes are so old that they are not visible anymore. Secondly, volcanoes that are in fact visible are not massive like the volcanoes found on the continent. Different types of formations and eruptions take place in the Galapagos and, consequently, many people don’t realize there’s a volcano until they are right on top of it.

Another expectation people have when coming to the archipelago is to see an exploding volcano. Galapagos volcanoes are not currently exploding, but they are experiencing constant volcanic activity. Even if a volcano was in fact exploding, it would be too dangerous to get too close. However, over in Sierra Negra, guests have the chance to experience the feeling of a young, active volcano up-close and actually step on brand new land. Visitors even get the chance to see fumaroles in Volcan Chico – a parasitic cone of Sierra Negra.

Can Sierra Negra explode? Anytime! In fact, its last eruption took place in 2005.

Would you walk along one of the largest volcanic calderas in the world?

– View of the Sierra Negra caldera –

How was the caldera formed?

Sierra Negra is located 1,124 metres above sea level and the caldera is 17 km wide, making for an impressive view of the surrounding areas. A caldera in insular volcanoes is formed by means of a mechanical process, which means that the area has a direct connection to a magma chamber. After an eruption, a magma chamber takes a long time to fill up again. During this time, the volcano on top of it can no longer hold its weight, causing it to collapse. This doesn’t mean the volcano is no longer active. With Sierra Negra, volcanic eruptions keep on happening, not through a crater, but rather by means of volcanic flows. When magma creates pressure, lava comes out from wherever it finds a way out. Lava can come out from the caldera, the rim, or even the outskirts of the volcano. These new volcanic flows start throwing the volcanic product in all directions, filling up the caldera in certain areas.

These spots are easy to identify because there are darker spots of lava rock present amidst lighter-coloured patches of terrain.

In fact, the age of the land over in Sierra Negra is easy to identify. For example, a person can easily see that the rim is full of vegetation, while the caldera holds almost no life. This means the caldera is much younger.

Sierra Negra’s mechanical and volcanic processes are an example of how alive volcanoes are and how they can change within a period of thousands of years. In fact, Sierra Negra is a young volcano and is a mere 535,000 years old. A baby, in volcano time.

Part of this volcanic activity can still be seen in Volcan Chico. This area holds no vegetation. It’s completely covered by volcanic debris. Here you can get so close to the fumaroles that you’ll feel like you are in an Indiana Jones movie. Fumaroles are an opening on the crust of the volcano, through which pressure and gases are released. Fumaroles are a symptom of a healthy volcano. At Volcan Chico you will feel the volcano with all your senses. You will smell the sulphur-laden air, sense the vapours, and clearly feel how the temperature rises in contrast to the fresher air of the highlands.

How do We Visit Sierra Negra?

Our transport vehicles will drive you from Scalesia Lodge, where you will be staying during your Island-2-Island programme. It’s a 10 km drive to the caldera. The car will leave you at the parking spot, and from here you will start a 5-minute gradual ascent to the rim. Via a marked trail, you will walk from the windward side to the leeward side. Once you start getting into the leeward side you will start noticing the actual caldera. You can see many endemic plants along the way. One of them is the Darwin’s Aster – from the Darwinialthamnus genre – which is one of the seven genres endemic to the Galapagos. This kind of plant is only seen in the highlands of the island.

Like all volcanoes, Sierra Negra is ready to show us what we are made of while experiencing what it’s like to be right at the source of life. Experience it for yourself and be transformed!

previousGalapagos coffee: a niche that’s waiting to become a part of the Galapagos tourism experience