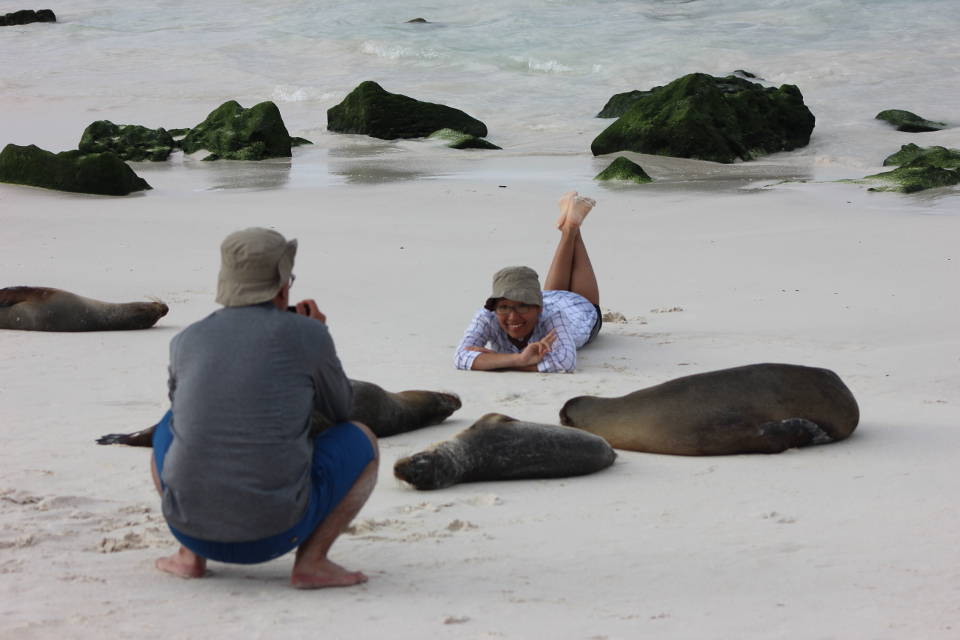 Snorkelling in Galapagos: top animals you’ll get to swim with

Snorkelling in Galapagos is sure to be one of the most magical experiences you’ll have during your time in the archipelago. The biggest reason why? Because of the vast amount of fauna you’ll have surrounding you, almost as if you’d summoned them for yourself! Being a source of curiosity for other creatures is almost like a superpower unto itself, such that with just a little bit of patience and fearlessness, snorkelling in Galapagos will have creatures swimming within arms-length of your snorkelling mask, ogling your presence to try and “figure you out.” It’s an incredibly fun experience, which is why we recommend making it a core part of your Galapagos experience while staying at the Finch Bay Galapagos Hotel! Read-on and get stoked by finding out what animals you’ll get to swim with while snorkelling in Galapagos!

Both majestic and lethargic in their demeanour, sea turtles are a treat to swim beside while snorkelling in Galapagos. Their slow and ridiculously laid-back style of movement underwater makes them an easy target for us human to get up close to (but remember, not too close!) and snap a beautiful picture of their worn and wise-looking shells and long flippers.

Perhaps one of the most playful creatures of the sea when it comes to snorkelling in Galapagos, sea lions truly are a spectacle to revel in and even become a part of (when they’re curious enough)! These adept swimmers won’t hesitate to get incredibly close to you to check you out! They’re quick and skillful with their movement, and will swim at you full speed before doing an underwater “somersault” of sorts and swimming away reluctantly. They’re even curious enough to nibble at your flippers, if you let them! Extra cute points for swimming next to a Galapagos sea lion pup (just watch out, as the mothers of these pups are highly protective)!

Bold, rugged and beautiful in their own right, snorkelling in Galapagos with these “imps of darkness” (as Darwin himself saw it fit to call them) is a pretty cool experience. Bonus points if you get to see them feasting on their main diet – nutritious algae that clings to the rocky shores in Galapagos waters. Their giant claws and tenacious grip are a sight to behold. If you’re hanging out in shallow waters, you can even walk beside one as they slither like snakes just below the surface of the water, with their heads poking out like miniature dogs.Getting next to them while snorkelling in the Galapagos means you officially have the bragging rights to say you swam with the only species of iguana that can swim in the world!

Slick and daunting with their grey scales and pointed fins, sharks seen while snorkelling in Galapagos are incredibly deceptive in the sense that they erroneously portray a dangerous image. Fun fact: they’re super docile! Sharks, in fact, are highly misunderstood creatures and are actually much less threatening than many people believe. The importance of sharks in Galapagos, too, is highly overseen. While snorkelling in Galapagos, you’ll get to swim over a school of white-tip sharks and silky sharks.

Snorkelling in Galapagos with Penguins

Flapping, zipping and propelling themselves around underwater like superfast mini-submarines, Galapagos penguins are one of the rarest species of penguins given they’re the only ones to live north of the equator! In Galapagos, the relatively colder waters are what allow them to thrive in this unique environment. Note: These can only be seen on the western side of Galapagos, available via Western Islands Galapagos itineraries.