Discover the incredible diversity within Santa Cruz, the island on which Finch Bay is located. On this land-based itinerary, you’ll find and walk alongside Galapagos giant tortoises at their special reserve while spotting mockingbirds and other beautiful Galapagos birds. You can opt to explore lava tunnels, where adventure meets geology, and enjoy fun activities such as kayaking, surfing or snorkeling over by the beautiful, white sands of Tortuga Bay. All guests will experience the famous Charles Darwin Research Station and come away with new knowledge about tortoises and the nature of evolution. 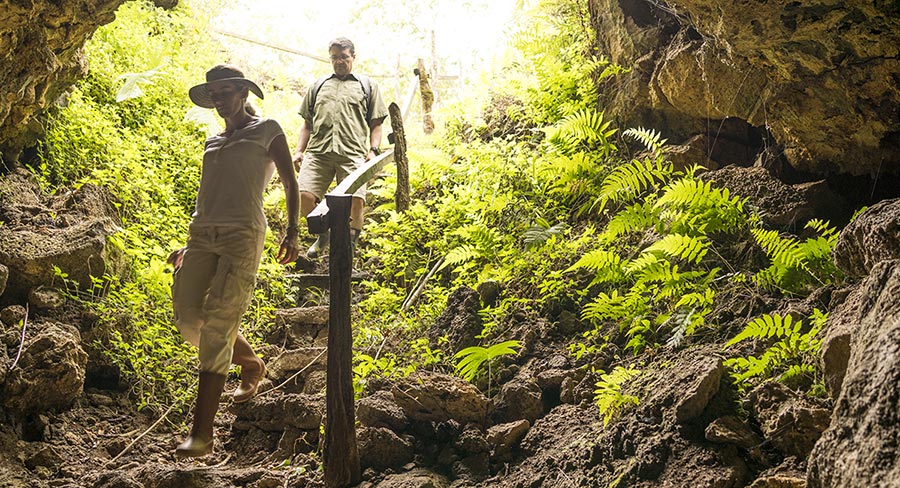 Depart from the hotel towards the Highlands of Santa Cruz. A short drive across the farming area will lead us to El Manzanillo, which is located along the northern edge of the Giant Tortoise Reserve. El Manzanillo sits right on the natural path that tortoises take every year as they either migrate to higher, more humid locations during the Dry Season (June-September) or when they descend to the lowlands during the Hot Season. The Galapagos giant tortoise (Chelonoidis nigra) is the largest living tortoise species, weighing up to 250 kg (550 lb)! It plays an important biological role as the top grazer in its habitat. In the wild, these gentle giants slowly make their way through the dense foliage and bush of the highlands of Santa Cruz. The shape of their shell varies from island to island, too. Throughout the year on Santa Cruz, giant tortoises can be seen grazing on the surrounding vegetation, wallowing in muddy banks or in large ponds.

The area is teeming with life: chirping woodpecker mockingbirds, flycatchers, as well as ducks, herons and gallinules that all make this an exciting morning visit. On the way back to Puerto Ayora, we will visit one of the island’s lava tunnels – significant geological formations that take us back in time and allow us to learn about how lava flows shaped the islands. After this, we’ll have lunch at El Manzanillo.

Tortuga Bay is a glorious beach that is located southwest of Puerto Ayora on Santa Cruz Island. Tortuga means “turtle” in Spanish and it was named as such due to the fact that sea turtles have made this one of their favorite places to come and lay their eggs! The stunning, white sand beach is considered by many to be the most beautiful stretch of coast in the Galapagos archipelago. Tortuga Bay is reached via a marked and cobbled 2 kilometer (1.2 mile) path that starts at the west end of Charles Binford Street, not all that far from Puerto Ayora itself. Guests must sign in and out at the National Park control point that sits at the beginning of the path. It is open daily from 6:00 AM to 6:30 PM.* The trail and beach provide excellent birdwatching opportunities, with plenty of Darwin’s finches and other seabirds. The beach itself is a great place to go kayaking, snorkeling, and/or surfing!

*Please note: The return trip from Tortuga Bay will be made in one of two ways, depending on the tide forecast for that particular day.

If the tide forecast shows that it is possible, the group will make their return trip by boat. If it is not, the group will take a 45-minute guided walk back to the entrance gate of the beach and then board a bus that will take them to the main pier in Puerto Ayora. This decision will be made at the guide’s discretion.

Afterwards, we’ll head to the headquarters of the Galapagos National Park Service and the Charles Darwin Research Station, which are located side-by-side, right on the edge of Puerto Ayora. Here, there is an interpretation center open to the public where you may also view their tortoise breeding program as well as giant tortoises in captivity. A visit to the Center is sure to expand your knowledge of this unique, iconic Galapagos animal as well as the ongoing conservation efforts in the islands.

Local authorities manage the quarantine system of the Galapagos National Park in order to reduce the possibility of foreign species invading the archipelago. All cargo and luggage that arrives to Galapagos National Park or that is transferred from one island to another must be inspected. All aircrafts are disinfected with Permethrin before landing. To preserve human health and the native species of the Galapagos Islands, the following products may not be transferred to Galapagos: fresh vegetables and fruits, animal products and/or their derivatives, dairy products, other live animals, pathological samples, dry coffee beans, genetically modified organisms, forest species or their disseminative parts, grass and its disseminative parts, fresh flowers, medicinal plants and their disseminative parts, banana tree leaves, micro-organisms (fungi, bacteria, etc.) soil and sand, and animal vaccines.

NO MATTER WHAT KIND OF GALAPAGOS VACATION YOU’RE LOOKING FOR, OUR OPTIONS AT THE FINCH BAY ARE SURE TO BE THE PERFECT FIT.  VIEW ALL PROGRAMS